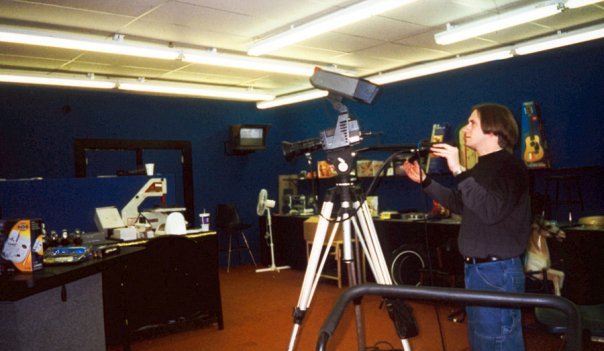 20 years ago: Joe’s start in Broadcasting

At 24 years old, I had a dream of working in television. In early January 2000, I finally got my chance to do so. By chance, I was watching television one evening, and had reprogrammed the channels on my TV, since I had recently ditched cable and was using an antenna. Lo and behold, I came across a new channel that had literally gone on the air the week before. WONT-LP Channel 35, known on air as “WANT-TV” was a low-power TV station that normally broadcasted America’s Collectibles Network during the day, and for six hours a night from 6pm to midnight every day, would broadcast a live auction of salvage merchandise.

Needless to say, I was intrigued. It was a decidedly low-budget affair. It was a one camera operation, poorly lit, and had no titles on the screen, and ran no commercials.

I had to know more.

I bid on an stereo receiver that was marked as being in “As-Is” condition, and won the item for a $1 bid. To pick up the item, I had to drive to the TV station, which was located at a mall at the time that had seen better days, the Eastland Mall in North Versailles, PA.

When I got there, the manager of the auction was working the front desk, and after I paid for my item, I asked him if they were hiring, and he mentioned that they were looking for a part-time camera operator to work two nights a week. Since I already had a full-time job and was looking to make a little extra cash, this was perfect and I applied for the job. He asked me on the spot to come in the next evening, and work a shift since as it turned out, the only other camera operator had yet to have a day off. Also, it was my audition, and I passed with flying colors since I had operated studio cameras in college, and was pretty comfortable with them.

And thus, this was how my career in television started.

While running camera was enjoyable and easy, I wanted to do more. Literally less than a month into working there, I started making needed changes to the station’s outdated technology. I eventually got a computer wired up so the auction program would have graphics on the screen, and hooked up some U-Matic videotape decks to the video switcher so the station could start running other programs and commercials which made the station owners happy. I also was a jack of all trades, doing everything from announcing to managing the auctions. Sometimes I also filled in as host as well.

As a funny aside to to changing the call letters, the owner of Abacus Television also owned a TV station in Greensburg, PA. I had suggested renaming the station to WQVC as a joke, expecting the owner to reject it, but he ended up going for it. Funny enough, a decade later, he started running QVC on it. Who would have guessed.

Working a live, six-hour show, there was plenty of screw-ups. Here’s a sampling of them. Pay attention to the first clip in the video, since I’m announcing the rules of the auction, and made an unfortunate error in trying to combine the words ‘permanently’ and ‘suspended’ together into a new word that one wouldn’t want to say on broadcast television.

While working at the station was fun, it didn’t pay very well. By 2003, I had moved on to another TV station. That lasted for four years, until I finally exited television and went back into the world of Information Technology, where I still am today.

While this station was never on cable, as many Low Power TV stations were not and still are not, it eventually caused the demise of the auction programming on the station. What’s even more interesting is that there are people who I encounter out and about nowadays that still remember this auction program 20 years later. As I found out a few years ago, the show apparently became a cult favorite among the college crowd in Pittsburgh since the tower we broadcasted from was next to the University of Pittsburgh.

As I have had other internet broadcasting jobs since then, and nowadays host NOTSTR8CAST with Jason, television is where I got my start, and I will remember it fondly.

As for the stereo receiver I had won for that $1 bid? It worked fine for a few years, and then just died one day.

It was the best dollar I had ever spent.